PlayKards is no longer maintained. Go to the official website https://www.kards.com/decks to find the best decks. Long live Kards !

I am very happy to announce the winners of our second Card Creation Competition!

Let's dive right in with our first-place winner: Macreus

Included description: These set of cards were directly inspired by the famous 'Dambuster' regiment, No. 617 Squadron RAF, their missions were vital in crippling infrastructure and causing months of lost production. I wanted to create the cards in a way that mimicked those missions in game which is why they all cause your opponent to lose a kredit slot as a way to emulate loss of infrastructure/production. The bomber unit also causes a random enemy unit to retreat, I gave that ability to further compound the idea of a production setback. The card backing is inspired by the No. 617 Squadron's roundel. As part of the presentation element, I spent a lot of time really trying to nail down the font size, letter seperation and font colour to really embed these cards in the Kards universe. A big part of trying to make these as convincing as possible was picking appropriate artwork that tries to visually designate whether a card is a unit or an order which is why the bomber is the focus of the image on the unit whereas in the order, the bomber is just an element of the the artwork.

My thoughts: This entry is number one for many reasons, from the detail put into the construction of the cards, to the card back and strong historical theme, Macreus has truly earned the top spot. Some of you may be wondering why there are three cards shown for the winning entry, this is because this image was the submission and I also feel that they should be showcased together for full effect. Congratulations to Macreus for winning first!

Now here is our second-place winner: Ryguy aka Rydekk

Included description: Essentially 1 blitz units with token card attached to it and 1 order card for the Italian. Made this card a while back, one thing that needs to be changed is operation cost. 1---> 3 operation cost. (For Autoblinda)

My thoughts: I really like the idea behind this card and I think it would give an interesting tool to Italy, a nation which is a bit weak even considering its now indefinite ally-only status. I agree with his proposed change in operation cost, but overall a really strong submission deserving of second place. Congratulations to Ryguy on winning second place!

We now move to our third-place winner: TheDevil'sAHandsomeMan

Included description: The Big wing was quite slow to assemble, but extremely effective when deployed on mass during the battle of Britain. British air command had to use their fighters sparingly, as they lacked sufficient numbers to detest consecutive air blitzes. Hurricanes and spitfires made up the majority of the large aircraft formations, as they were quite effective in their fighter capabilities. Although the Spitfire overshadowed the hurricane, Hurricanes played a vital role in the defense of Britain. The Battle for Britain was a turning point for the United Kingdom as they crippled the Luftwaffe, preventing them from fully recovering. It would be a splendid idea to implement the Big Wing to honor the airmen who served for king and country!

My thoughts: For clarity, I am going off of the first card option. I really like this card because it gives something to ramp to, which is one of the major problems with ramp currently. You can play it in a normal Brit air deck and use it to provide extra planes, or you could ramp and try to pull of an OTK. Congratulations to TheDevil'sAHandsomeMan on third place!

Our first honorable mention is: hy286

Deployment Effect: Deal 2 damage to target enemy unit in the frontline, if this destroyed it, all friendly infantry can move and attack this turn.

Included description: Premise: Bringing the legendary 10th Mountain to the game, a division whose elite status is on-par with the 101st Airborne. This card pays nod to many existing cards. The 101st Airborne does damage to the support line, this one does the opposite. The trigger condition is a nod to Awoken Giant and finally the trigger reward is a nod to Lightning Conquest. Note, Lightning Conquest grant damage immunity, this does not. All this actually fits the history very well. Historical Inspiration: The deployment effect is alluding to the Battle of Riva Ridge. After initial Allied success in Italy, the campaign bogged down and eventually stalled at the Apennies mountains. The German utilized the ridgeline to create a defensive line called the Gothic Line which is the last line of defense before the Alps. The Allies did not have dedicated mountain units to dislodge the Germans until the 10th Mountain showed up. The 10th Mountain scouted the mountains and prepared to scale the cliff in order to catch the German off guard. They succeeded and managed to take over the ridge in six days. In less than a month later, the allies led by 10th Mountain pushed the Germans to the Alps. The deployment effect intend to showcase the breakthrough. Stats: Modest stat for a 5k infantry unit, the Alpine keyword can buff it. But the deployment effect should see it as been useful in US frontline decks.

My thoughts: This is a great submission that plays right into US/Italian Alpine decks and there was clearly a lot of thought behind it. Thank you for your submission hy286!

Our second honorable mention is: aniretalek

Included description: Vasily Grigoryevich Zaytsev was a Soviet sniper during World War II. Prior to 10 November 1942, he killed 32 Axis soldiers with a standard-issue rifle. Between 10 November 1942 and 17 December 1942, during the Battle of Stalingrad, he killed 225 enemy soldiers, including 11 snipers. [source: wikipedia] The Smokescreen ability reflects the difficulty to spot the sniper, before he fires the first shot. The Fury ability, the low activation cost and the +6 attack against infantry reflects the lethal efficiency of one-shot kills. It counts as an Artillery, because it's hard for the target to return fire and the sniper can shoot at very long distances. Against armor or other units, he is almost useless, unless buffed by other sources, hence the 0 initial attack. Getting +1 attack by some other source and finishing off a plane or a tank, could be thematicaly explained as a shot to the pilot or the driver of an already disabled unit. The 3 defense reflects the difficulty to spot the sniper because he is in cover, so low-cost removals of 1-2 damage are not so efficient against him. He is a good answer against heavily buffed infantry guard units and an overpowered artillery if buffed, that's why it's an Elite! The deployment kost of 4K can be debated...but in my opinion it's good enough because he works good as a combo card rather than a stand-alone answer, so it should be too expensive to deploy.

My thoughts: A very interesting idea with a lot of thought behind it, though the stats are a bit too strong in my opinion. Nevertheless, I thought it deserved to be shown. Thank you for your submission aniretalek!

Our last (but certainly not least) honorable mention comes from: FrancenCZ 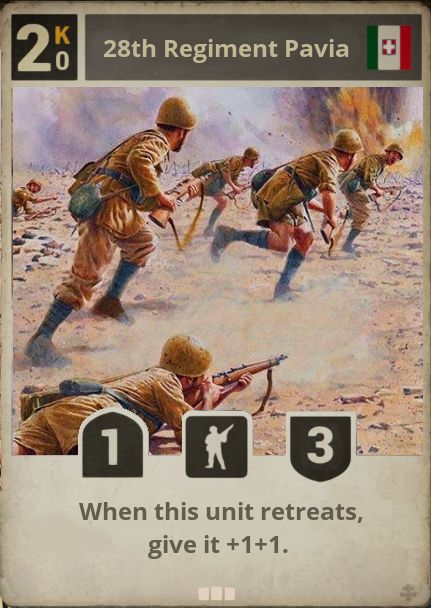 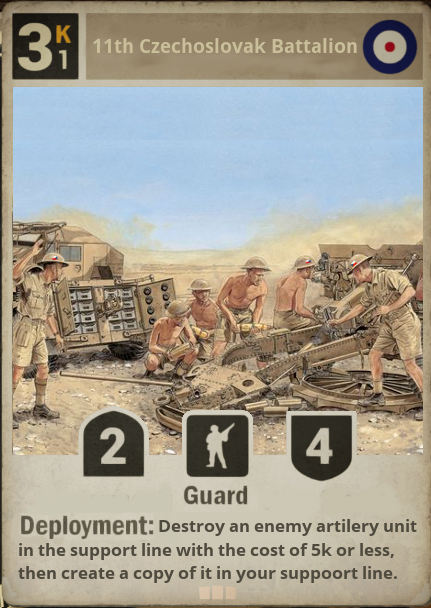 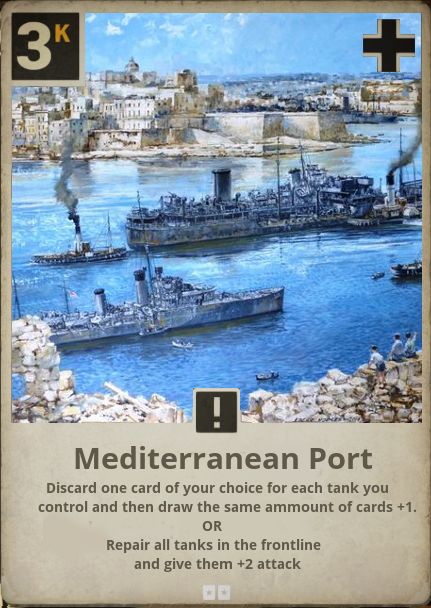 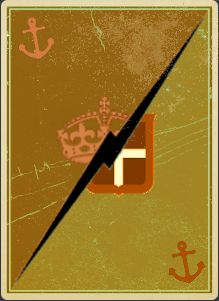 Included description: To wrap up the whole Tobruk collection of cards, I also created a Tobruk themed cardback, also representing the brits and the italians fighting in the Mediterranean. I really tried to stick to the historical theme of the cards with the three submissions posted above, the included cardback for extra flavour. I was really inspired by the british performance in Tobruk and by the suprising performace of the italians when I was doing my research and I wanted to reflect this in the cards. I believe these cards can bring more interesting options for play in each respected nations. Italy gains new sinergies with it's light tank,  Britain gains a new option to expand it's artilery and guard unit arsenal and Germany gains a new way to clear it's hand off of useless cards when it needs new or different cards to defeat it's enemy. This was a lot of fun for me and I look forwards to participating again in the future. (Note: I could not fit all included descriptions, but the summary provides all the needed info)

My thoughts: There was clearly a lot of effort put into this submission and it certainly shows! If the balance were a bit better on some cards Francen would almost certainly be taking home a prize today! I really like the cardback and the effort, great work! Thank you FrancenCZ for your submission!

This competition has been a great success and I would like to thank all the participants for submitting their awesome creations! I would also like to apologize to the participants for any issues they had when uploading their submissions, we are working on fixing and improving the submission module. I would like to once again congratulate Macreus on first, Ryguy on second, and TheDevil'sAHandsomeMan on third!

I hope you enjoyed this competition and we will be working on making it even better!