The time has come! Today we announce the winners of our first Card Creation Competition! But first I would like to thank all of the participants for their submissions, there was clearly a lot of thought put into them. Now without further ado here are our winners: 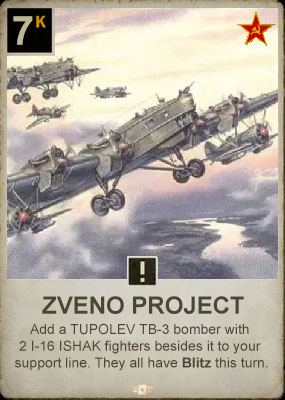 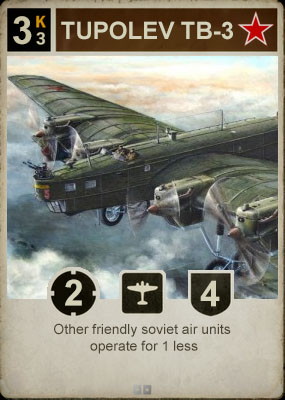 Zveno was a parasite aircraft concept developed in the Soviet Union during the 1930s. It consisted of a Tupolev TB-1 or a Tupolev TB-3 heavy bomber acting as a mothership for between two and five fighters. Depending on the Zveno variant, the fighters either launched with the mothership or docked in flight, and they could refuel from the bomber. The definitive Zveno-SPB using a TB-3 and two Polikarpov I-16s, each armed with two 250 kg (550 lb) bombs, was used operationally with good results against strategic targets in Romania during the opening stages of the German-Soviet War. The same squadron afterwards also carried out a tactical attack against a bridge over the River Dnieper that had been captured by advancing German forces. In the opening stages, the Black Sea Fleet Air Force was tasked with destroying industrial targets in Nazi Germany-allied Romania. The most important of these was the King Carol I Bridge over Danube which carried the Ploiesti-Constansa oil pipeline. After several failed attempts to destroy the heavily protected bridge with conventional bombers, the task was given to the Zveno squadron. As a combat test, it was decided to first attack the Constan?a oil depot. On 26 July 1941, two Zveno-SPB aircraft performed a successful attack on the depot in broad daylight with no losses. The fighters disconnected 40 km (22 NM, 25 mi) from the target and returned to the home airfield under their own power. Despite the high success rate, Zveno missions ended by 1942 due to high vulnerability of the obsolete TB-3s and I-16s in the face of enemy air superiority. It is estimated that Zveno-SPB flew at least 30 combat missions.

This was our first place pick for many reasons, the first being the very well made mock-ups. Secondly the stats and abilities of the cards are quite fun, and they are something I would like to see added into the Russian bomber portfolio. Third of all is the historic information, which was not required at all. It's obvious that a lot of time and effort were put into these submissions, and for going above and beyond Y-Crad is our first place winner! Before I reveal our second place winner I know some of you are wondering why there are two cards being shown, so here's the answer: Since the main submission Zveno Project requires stats for the Tupolev TB-3 to work, it's only fair that the two are showcased together.

Congratulations to Spooz_Twitch for being our second place winner! Here's his submission: 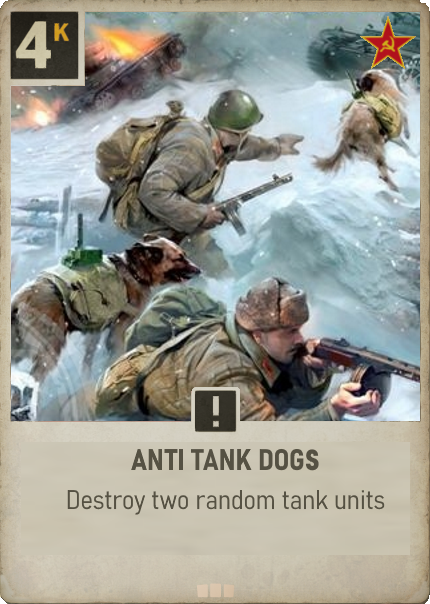 In the course of Germany advancing at the Eastern Front the soviets intensified the training on dogs being used as weapons against tanks. In the early stages of this concept it gave some collateral victims when the dogs reached for soviet tanks on that they where trained on.

To illustrate this happening the order destroys two random cards (also your own).

Another well made card, here's why we chose this as our second place winner: Firstly is the well made mock-up, he put some time in for this.  Second is the ability, this fits right in with the Soviet self damage theme and makes for some harrowing RNG plays no doubt! Or if you're a more careful player you might use this as a powerful removal with no tanks of your own on the board. Overall a well made card, and our runner up!

Proving you don't need a fancy mock-up to make it into the winner's circle, here's our third place winner Marv2.0!

Look at the top two cards of your opponent's draw pile, choose one and move it to the bottom the other remains on top.

The LRDG was a reconnaissance unit operating in Africa, it also was ordered to raid the enemies rear areas and helped SAS twice raiding airfields in the area. (This is probably the shortest possible description)

Now I believe that both parts of their activities are represented well enough in this order. With the Information side covered knowing which two cards are drawn when. (Next turn and Last draw) And sabotage with the ability to choose which card is drawn last.

We really like the ability of this card, it fits right into British control decks. It can be quite the combo breaker with a bit of luck, and overall well thought out card design. Getting hit with this card will certainly feel like sabotage, especially when it inevitably snags something good!

Now there were a lot of submissions, especially considering us starting the competition during the holiday season.

With that being said we wanted to showcase some of the other submissions that didn't quite make the top three.

First up we have a submission by moomoo:

106ème RT is a french transmission regiment that never existed except in a classic 70s french movie, probably known only by french people. Yes, I'm french. The movie is a lame comedy set on the WWII background. 4 useless soldiers from a useless company made of very human soldiers (the 7th company), they get lost in the war in 1940 then reappear in 1944 for the liberation. This unit can be played either as a powerfull boost if you chose to hold them in your hand until you have the 4 of them, or can be used in a more subtle way as a deck size reducer (to 36 best case scenario).

This card was a particular favorite of my esteemed colleague Isenberg, but it's ability would make it a quick favorite among Resistance deck players. A fun reference to a classic movie, it deserved to be shown.

Historical inspiration: Chasseurs Ardennais took part in defending of Belgium against Third Reich in 1940. Like all Belgians they've shown fierce resistance. This unit consisting of only 40 men held off the German forces commandered by Erwin Rommel until they've run out of ammo. Thanks to their bravery and destroying or disabling 5 German tanks with one 47mm antitank gun in one engagement, General Rommel said about them: "They are not men, they are green wolves".

Idea of the card: You want to save this card for a moment when enemy throws in battle more tanks than you can destroy in your next turn. By throwing this card you want to give yourself breathing room and time to play more units in order to destroy enemy tank forces.

I think this card would see some good use in a variety of decks, and it would certainly give control or Resistance decks a potent tool against German Fast Heinz decks. Not to mention the idea of another supporting nation, even though I feel an umbrella nation for such countries like the EU would be a bit better balanced. Again a great card idea with historical inspiration, on to the next!

Finally we have a submission by brycechang: 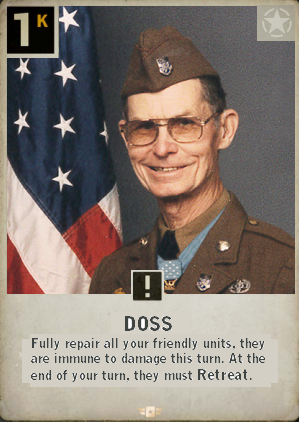 After watched "Hacksaw Ridge", I was really impressed by the spirit of Desmond Doss. He saved quite a lot of people, so I set his ability as "Repair" and "Retreat". As other figure Elite like "Patton"/"Fast Heinz", though his ability is quite strong, but won't affect the result directly. While we have to think how to wisely use his repair & retreat ability.

I think this is a fun card that plays into the US healing theme, while the retreating effect would also give you some thought on when to play it as bryce mentioned. But the retreat effect is not enough to counteract the immunity to damage that all of your units would gain. It could even be paired with US bomber deployment effects, talk about death from above!

Now onto some final notes:

While this competition was great, we aim to make the next one even better! Yes there will be a next time, we are still working out the dates but here's some of what to expect:

We will have a card editor for the competition, ensuring uniformity in formatting. It just makes it a bit easier to go through.

The other note is that if you already submitted a card to us no worries! We are allowing you to submit the same card even if you don't change it.

So thanks again to all of the great people who applied! I think that this was a great success, and I hope it only keeps getting better.

Congratulations again to Y-Crad on first place! Spooz_Twitch on second! And Marv2.0 on third!

So with that I wrap up our first Cards Creation Competition, and I hope to come to you with more news very soon. Happy New Year!